Fears of a possible new COVID-19 outbreak in a Chinese region of over 100 million residents have escalated after two cities from the area went under Wuhan-style lockdown.

It comes as Wuhan, the city where the pandemic began, reported a new infection today, bringing the total of active confirmed cases in the former epicentre to seven.

A ‘mysterious’ cluster of COVID-19 infections has ravaged a Chinese region of over 100 million residents as footage captures throngs of hazmat-clad workers conduct mass-testing on the citizens under Wuhan-style lockdown. Pictured, medical workers wait to be disinfected as they line up to submit the COVID-19 samples in Jilin on Sunday

A video released by The Beijing News has shown hazmat-clad health workers giving coronavirus testing to residents in Jilin province as part of the mass-screening carried out by the local government.

Authorities from Shulan, a city of 700,000 people located in Jilin province, said that they ‘will severely punish’ the residents who violate lockdown rules.

The city of Jilin, home to 4.5 million, has sealed off one of its districts this week after changing the area’s emergency level to ‘high-risk’.

More than 40,000 residents in both cities have received nucleic acid tests as the authorities scramble to prevent a second wave of the outbreak.

It comes as a cluster of infections emerged in Shulan earlier this month continues to spread and threaten the north-eastern Chinese region of ‘Dongbei’, which has 108 million residents. 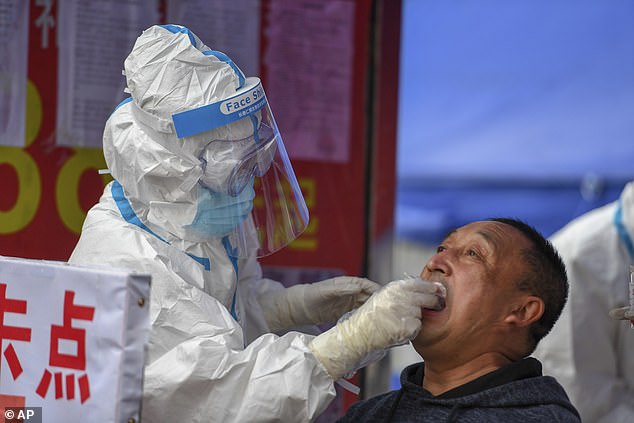 More than 40,000 residents in its second-largest city Jilin and Shulan have been screened as the authorities scramble to prevent a second wave of the outbreak. Pictured, a medical worker collects sample for COVID-19 testing at the Tongji community in Shulan 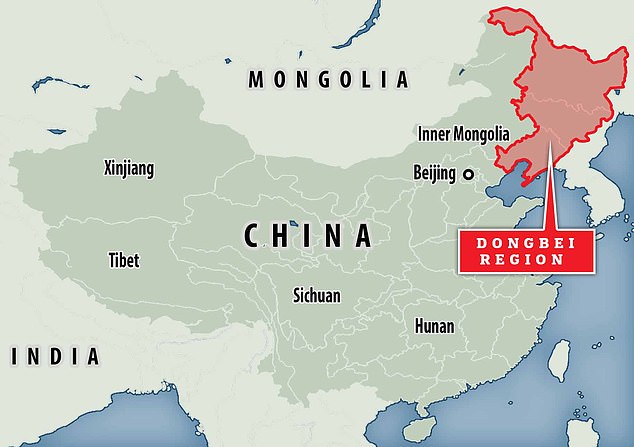 Dongbei, reminiscent of the Midlands in the UK, is a geographical region corresponding specifically to the three provinces of Liaoning, Jilin, and Heilongjiang 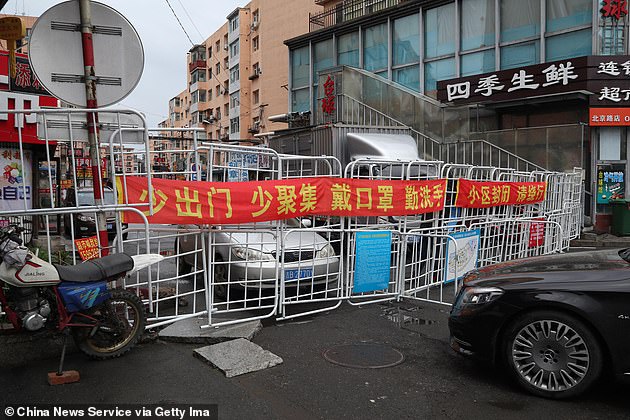 Shulan, a city of 600,000 people located in Jilin province of north-western China, has tightened quarantine measures today by banning residents from leaving their homes in compounds with confirmed or suspected COVID-19 cases. The picture taken on May 17 shows an entrance of a market is blocked in Jilin province

The province of Jilin reported five new infections today, bringing the total of confirmed cases related to the cluster to 39.

All the infections are believed to have all linked to the same source. But officials are still unravelling how the first patient, a 45-year-old laundry worker, contracted the killer bug.

The cities of Jilin and Shulan have appointed one local hospital each as designated facilities to quarantine COVID-19 patients, according to the authorities today.

Six officials – one from Shulan and five from Jilin city – have been removed from their posts following the emergence of the cluster, Chinese media report.

The city of Shulan has been under lockdown since May 9 after registering 12 COVID-19 cases in the space of two days.

Four days later, the city of Jilin, with a population of more than four million, shut down its borders and suspended public transport after reporting six new confirmed cases last Wednesday, all linked to the infection cluster in Shulan. 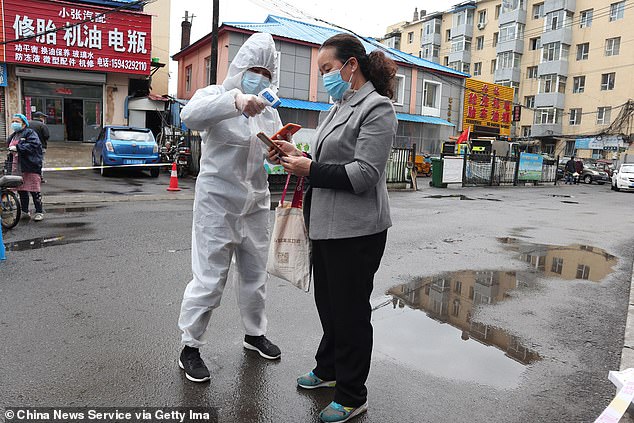 Households from areas with no infections can appoint only one family member to go out to purchase essentials once every two days for a maximum of two hours. A volunteer wearing a protective suit is seen scanning a woman’s health QR code at the temperature checkpoint at the entrance of a residential community in Jilin city on May 17 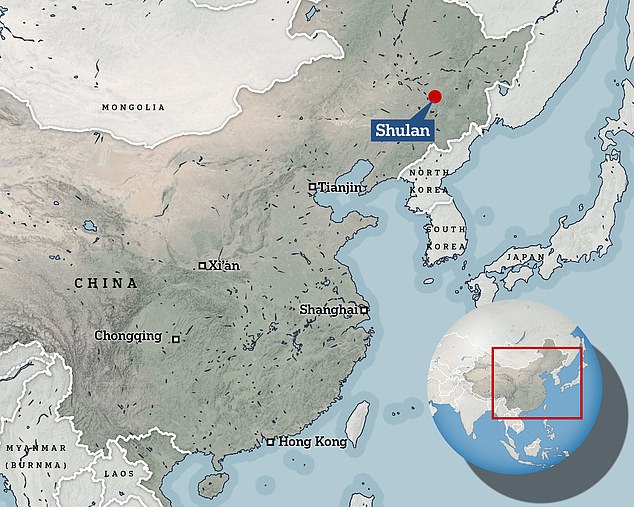 Shulan, a city of 700,000 people located in Jilin province of north-western China, has been a COVID-19 hotspot after reporting a cluster of infections earlier this month 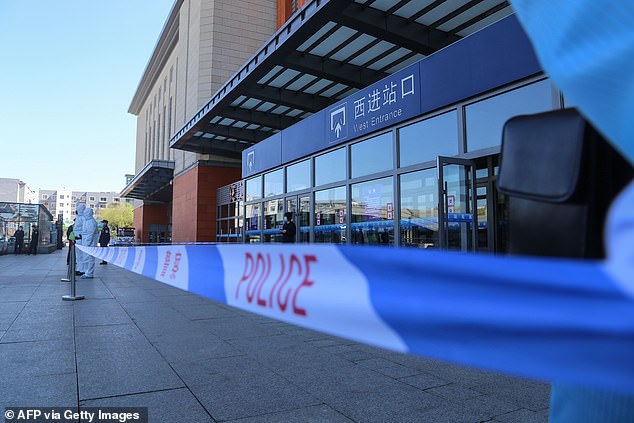 Jilin city reported six new confirmed cases on Wednesday, all linked to the Shulan cluster, bringing the total number of cases linked to a local laundry worker to 21. Police officers clad in protective suits stand guard outside Jilin city’s railway station on May 13

From Sunday, officials in Jilin city have sealed off one of its districts Fengman, after detecting 12 infections. The area’s emergency level has also been changed from ‘medium-risk’ to ‘high-risk’.

Shulan officials decided to implement further restrictions on its residents after the cluster of infections continue to spread across the province, according to an official notice issued yesterday.

The directive, billed as ‘Shulan’s most strict measures’, said that residential compounds with confirmed or suspected COVID-19 cases have been sealed off from Monday, with no citizen allowed to enter or leave. Daily supplies will be delivered to residents’ front doors by local supermarkets.

Households from areas with no infections can appoint only one family member to go out to purchase essentials once every two days for a maximum of two hours. Residents who break such rules will be banned from leaving their homes completely and ‘severely punished in accordance with the laws’, the notice said.

The cities of Jilin and Shulan are located in the eponymous province of Jilin, which borders Russia and North Korea. 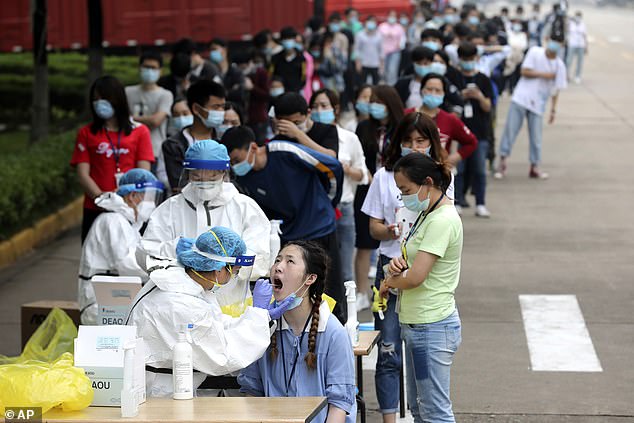 As of today, Jilin province has reported a total of 39 confirmed COVID-19 infections, of which 20 were recorded in Shulan and 19 were detected in the city of Jilin.

All of the cases were linked to a local laundry worker, a 45-year-old woman who tested positive on May 7 and was reported as the first confirmed infection. But it remains unclear how the patient contracted the virus.

Nine patients from the cluster of infections have recovered, according to the Jilin Health Commission today. No deaths have yet been reported.

It comes as Wuhan, the city where the pandemic began, has kicked off its 10-day coronavirus testing on its 11 million residents as seeing an emergence of new cases in Wuhan in recent days, after 35 days without fresh infections.

Wuhan reported a new infection today, bringing the total of active confirmed cases in the former epicentre to now seven.

On May 10, the former ground zero recorded six confirmed infections, sparking fears of a new outbreak in the city that lifted the draconian lockdown only over a month ago.

China has largely brought the virus under control, but it has been on edge about a potential second wave as it has lifted lockdowns and restrictions across the country.