UP TO 98 PERCENT FALSE-POSITIVE TEST RESULTS

Only one in 50 who tested positive was actually infected

More tests should enable Germany to gradually open up, but the interpretation of the test results remains unclear. An infographic from the RKI explains that – depending on the prevalence and the proportion of people actually infected in the population – only two percent of the positive results are correct. 98 percent are false-positive and force healthy people into quarantine until the test results are confirmed.

“Effective test approaches are at the center of the fight against SARS-CoV-2,” writes the Robert Koch Institute in an infographic . With the wide availability of quick and self-tests, however, the question of how the test results should be interpreted increasingly arises.

On the one hand, tests are not the same as tests and have corresponding differences in the small print ( Epoch Times reported ). On the other hand, the informative value “strongly depends on the proportion of infected people among the people tested,” explains the RKI. As a result, a test result is sometimes significantly less meaningful than assumed. For example, if the proportion of infected people in society falls – the declared goal of all corona measures – the probability that a positive (rapid) test result actually indicates an infection also decreases.

To determine the predictive accuracy of mass tests, including rapid and self-tests, three metrics are needed: sensitivity, specificity, and prevalence. The RKI also calls the latter the pretest probability.

Both sensitivity and specificity “describe how good a test is,” explains the RKI. The infographic also says: “The sensitivity is the proportion of people with a positive test result among the infected.” Similarly, the specificity stands for the proportion of people who tested negative among the non-infected. Both values ​​are test-specific and can differ from manufacturer to manufacturer. This table from the Federal Institute for Drugs and Medical Devices (BfArM) provides an overview .

The prevalence in turn indicates the proportion of people who – recognized or undetected – are actually infected with the corona virus. This value is a societal variable that is subject to constant fluctuations, the RKI explained at the request of the Epoch Times. For this reason it is not possible to give a value for Germany.

In its infographic, the RKI therefore uses two assumptions to determine the different forecast accuracy. The RKI assumes 80 percent for sensitivity and 98 percent for specificity. Both values ​​appear in this order of magnitude in the BfArM table. The RKI does not state the prevalence, but calculates two cases:

98 percent of all positive test results are false

Conversely, however, this also means that with 5 infected people per 10,000 people, 98 percent of the positive test results are false-positive. This means that 98 percent of those who tested positive first have to be unjustified in quarantine until a (correct) negative PCR test result is available. For these tests, too, the lower the prevalence, the less precise the results.

Anyone who thinks 5 out of 10,000 is a really low value is absolutely right. Extrapolated to the German population, this corresponds to around 41,500 people. What is more interesting, however, is the comparison with the seven-day incidence – even if the incidence and prevalence are two completely different numbers. 5 out of 10,000 people corresponds to 50 out of 100,000 people. This is the limit that is provided for an opening.

On the other hand, the RKI has assumed a prevalence of 1,000 infected people per 10,000 people. That would correspond to around 8.3 million Germans or – for comparison – a seven-day incidence of 10,000.

Both values, 5 and 1,000 per 10,000 people, sound implausible and are more descriptive than realistic. To illustrate this, two calculation examples based on real numbers should follow. At this point, the (limping) comparison to the incidence is suggested again.

The incidence is how many people tested positive in the last seven days. So an incidence of 50 means that 50 out of 100,000 people tested got a positive test result. There is no distinction between false and true positive.

With the opening of schools, comprehensive test strategies in companies and – among other things – tests in old people’s homes, it can be assumed that all population groups will be tested equally. If you test 100,000 randomly selected people, it can still be assumed that the test results of this sample roughly correspond to the results of all of Germany. In the absence of more precise values ​​for the prevalence, it can therefore be assumed that the incidence represents the actual occurrence of the infection.

The Saxon Vogtlandkreis had the highest incidence value since the beginning of the pandemic at the turn of the year. In the situation report of January 2, the RKI reported 885.4 cases per 100,000 inhabitants. With an assumed prevalence of 89 per 10,000, analogous to the calculation of the RKI infographic, it results that around 26.4 percent of the positive test results indicate an infection. [71.2 / (71.2 + 198.22) = 0.26427 = 26.43%, see Tab. 1] However, this also means that three out of four people tested receive a false-positive rapid test result. 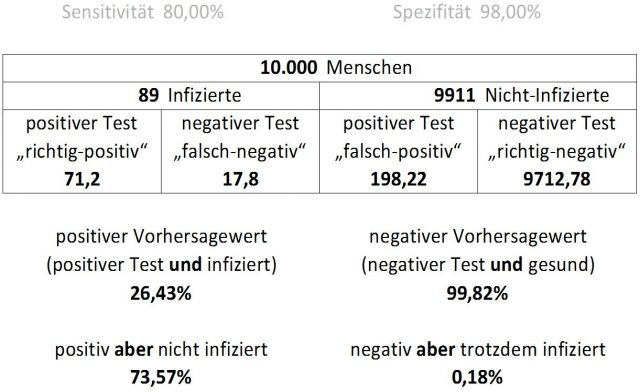 Table 1: Sample calculation with a prevalence of 890 infected people per 100,000 people. This value corresponds to the highest reported incidence.Photo: ts / Epoch Times

At the same time, however, the test provides 200 (199.98) false-positive results, which must be refuted by a PCR test. However, these tests are not free of errors either. In addition, if all German citizens test themselves twice a week as recommended, an (additional) 3.3 million confirmation tests will have to be analyzed nationwide. According to the RKI, the weekly PCR test capacity was recently around 2.3 million . 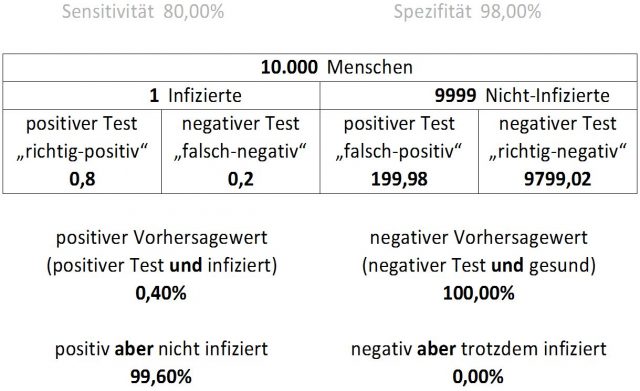 Table 2: Sample calculation with a prevalence of 10 infected people per 100,000 people. This value corresponds to the incidence limit aimed for by some politicians. If you can’t imagine 0.8 true positive test results, multiply all the numbers by a factor of ten or 100.